Member, Board of Trustees 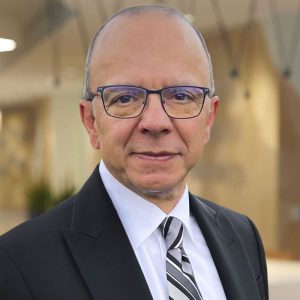 Mr. ElSawy served as the president and CEO of Noblis from October 2007 to October 2022. In this role he was responsible for the general management and strategic direction of the organization’s overall scientific, technical, financial and administrative activities. He was elected to the Noblis Board of Trustees in 2007 and continues to serve in this role.

Mr. ElSawy has extensive experience leading organizations and developing innovative solutions to some of the most complex challenges facing public sector enterprises in the domains of national security, transportation, health and the environment.

His work experience includes research and development, complex engineering of information and telecommunications systems, modeling and simulation, enterprise transformation using cloud and high-performance computing, program management and acquisition of large-scale systems. He has also earned an international reputation as a leader in aviation, informing domestic and international aviation policy.

Under his leadership, Noblis was selected several times as a Top Employer by The Washington Post, selected as one of the “50 Best Small and Mid-size Companies to Work for in America” and named one of the “World’s Most Ethical” companies by the Ethisphere Institute several times.

Prior to joining Noblis, Mr. ElSawy was a senior vice president and general manager of the Center for Advanced Aviation System Development of The MITRE Corporation. He served for seven years as the director of the Federally Funded Research and Development Center (FFRDC) for the FAA.

In 2009, Mr. ElSawy was named EcoCEO by SmartCEO magazine and was named to the Washingtonian Tech Titan list multiple times. In 2012, he was elected to the George Washington University Engineering Hall of Fame, and in 2016 he was named in the Wash100 by Executive Mosaic.

Mr. ElSawy served as a Board Member of the Northern Virginia Technology Council (NVTC), and a Board of Trustees member of George Washington University.